Our first event at Southport and Ainsdale was brilliant and a great way to start the 2015 tour. Many thanks to all of our members and guests who attended, the feedback we have received has been very positive.

There was some very good golf being played, and some of those players who said they weren’t competitive were certainly playing to win! Congratulations to Russ Lees who won first prize and will be representing GBT at the 5th Anniversary of the On Course Foundation in the presence of his Royal Highness the Duke of York at the Royal Household Golf Club, Windsor Castle on 3 July.

Nearest the pin winners were Andy Myers from Coyle Personnel and Dave Slattery from the On Course Foundation. Dave was obviously in top form as he was also one of the ‘Beat the pro’ winners, well done gentlemen.

S & A were fantastic and really looked after our members and guests. The service was excellent and they made everyone feel welcome. We will definitely be returning to this great course in the future.

Pictures from S & A can be viewed on our gallery.

To request further information or to discuss your requirements in more detail, please contact us either by phone, email or call back:

Call Back: Within Two Hours 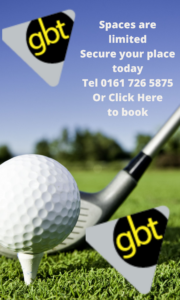